Redesign of the Test-taking platform was aimed to solve many problems that were part of the platform from the very beginning and now affecting the usability of the product drastically.​

It aimed to modernise the platform for newer web standards, cater to an international audience, implements its new design system, and solve critical UX issues.​
This test-taking platform was one of the first products that adopted new methodologies, newer design and accessibility standards and newer tech framework, which helped influence its future direction and other related features of the organisation.

Due to NDA regulations and Confidentiality agreement with my current organisation, I won't be discussing the in-depth research methodologies used, or explanation of feature(s) in this project.
If you wish to know more, Please connect with me through LinkedIn or through my E-mail

Since there was a lack of a proper analytics system available on the system.
We had to approach it via Qualitative analysis methods by taking personal interviews of various people, clients, and direct recipients of the platform to identify the potential sets of issues and gather general feedback and expectations of a regular platform patron.

With the combination of years of direct client feedback and the in-built platform feedback mechanism which every test-taker had to take at the end of their test.
We identified certain vital aspects to anchor further investigation, conduct user interviews, and identify actual pain points.

Through the anchors discovered, We’ve managed to conduct a series of interviews with patrons of the test platform.
The people we interviewed, ranged from experienced to new users and, from general to advanced audience to understand the behaviour of a test-taker and the test journey holistically.

Through these exercises, We were able to identify four specific problems with the current platform.

The test-taking platform was slow to load and/or appeared to look slow compared to similar websites, and people were frustrated.
They expected the website to be as fast as modern websites, if not faster.

The main navigation elements were placed in an unorganised way, which causes severe lag in continuous navigation and is challenging to identify when using higher screen resolutions.
It leads to adding more frustration in an already frustrated test-taking environment.

People unanimously agreed that the test-taking platform looked visually dated and out of touch with modern website design.

The test experience is not intuitive; interaction feels out of place and doesn’t sit right with the modern websites people are used to.

How might we make the Test-taking platform fast, easy to navigate, modern and intuitive?

The new test-taking platform must achieve these goals to be considered successful.

The new website should have a competitively fast performance by improving Time-to-Interaction and increasing the overall perceived interface responsiveness.

The navigation pattern of the new platform must conform to the modern and responsive navigation paradigm, with highlighted identifiers, and scalable on high-resolution screens so that people don’t have to look around to identify the next step.

The platform's user interface should be visually refreshed and use the organisation's new dynamic design system, and extend the support to incorporate new functionalities in the future.

The interface, interactions, and elements should feel intuitive, native to the device, and assist people with their tests without overloading information.

We went through several rounds of ideation and enforced a fail-fast methodology to experiment, trying out new and innovative design patterns and interactions before having a shippable design candidate. 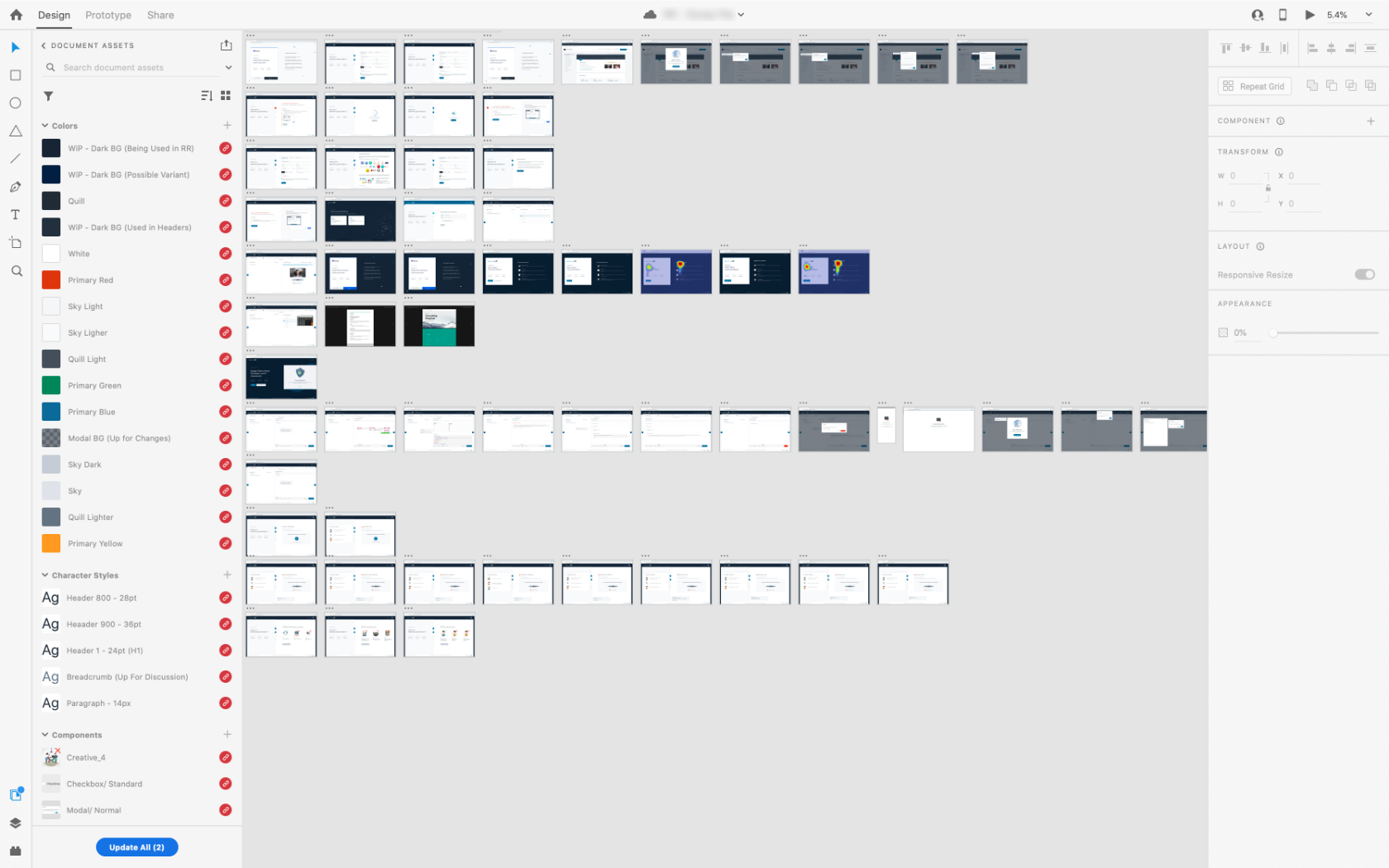 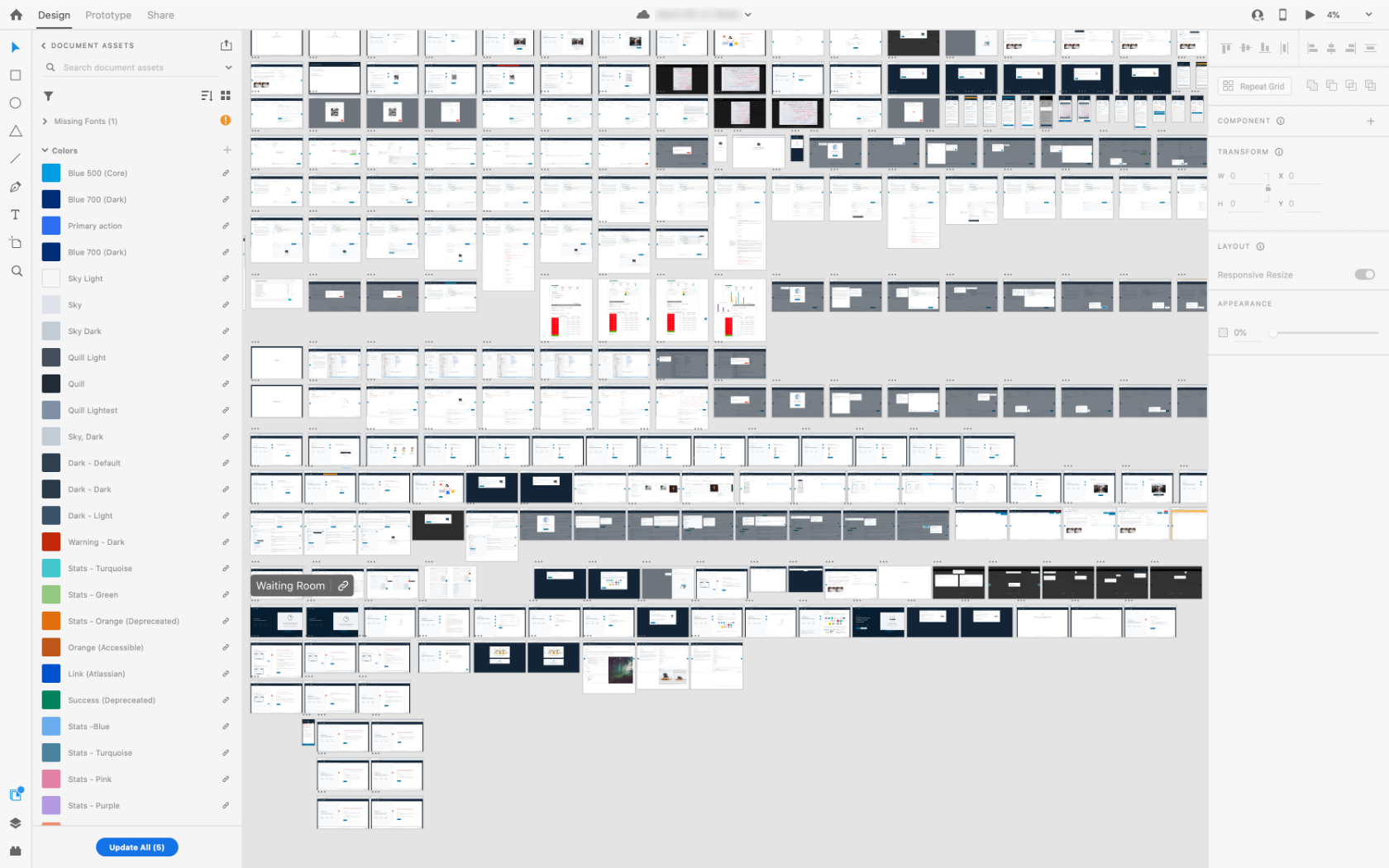 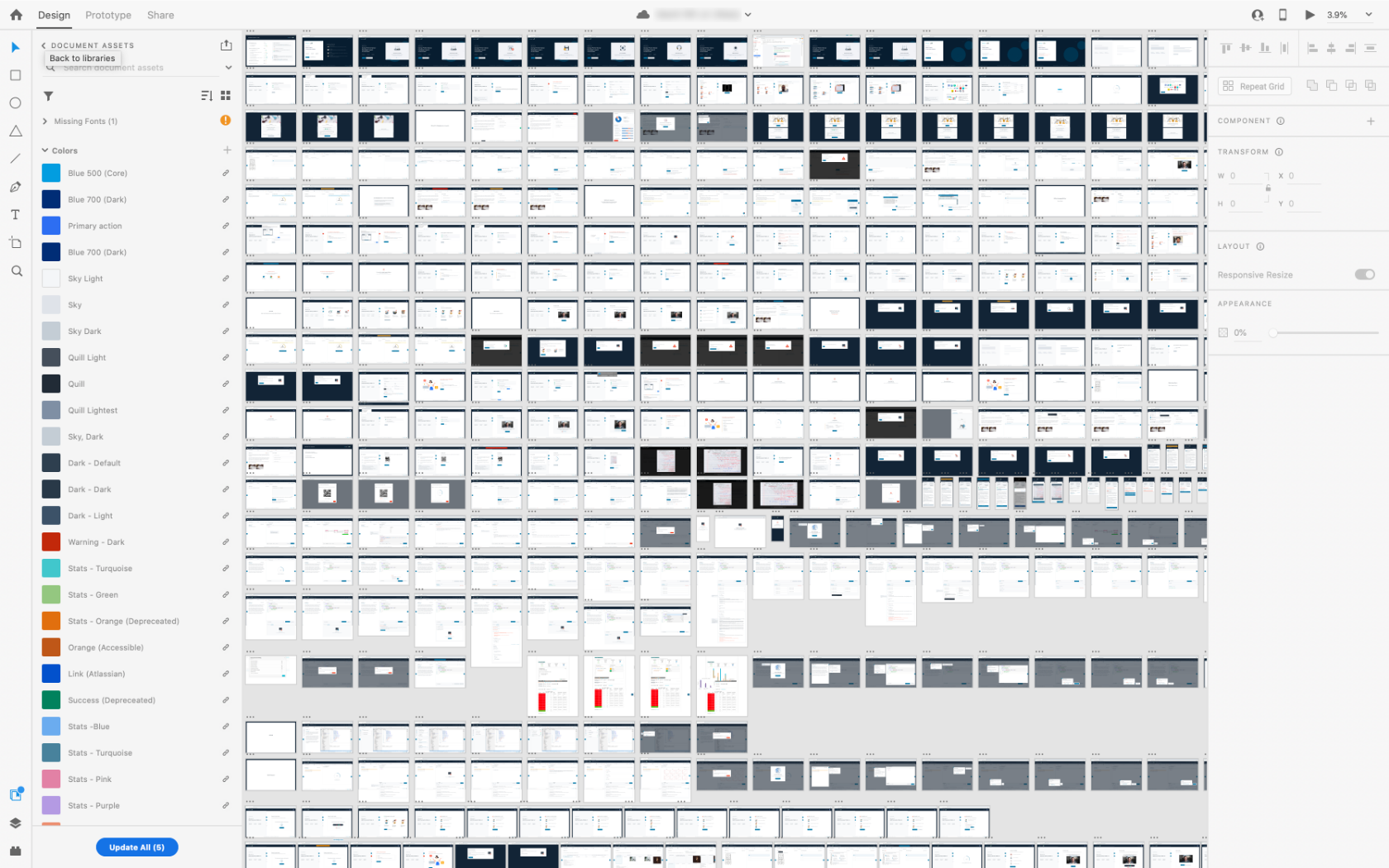 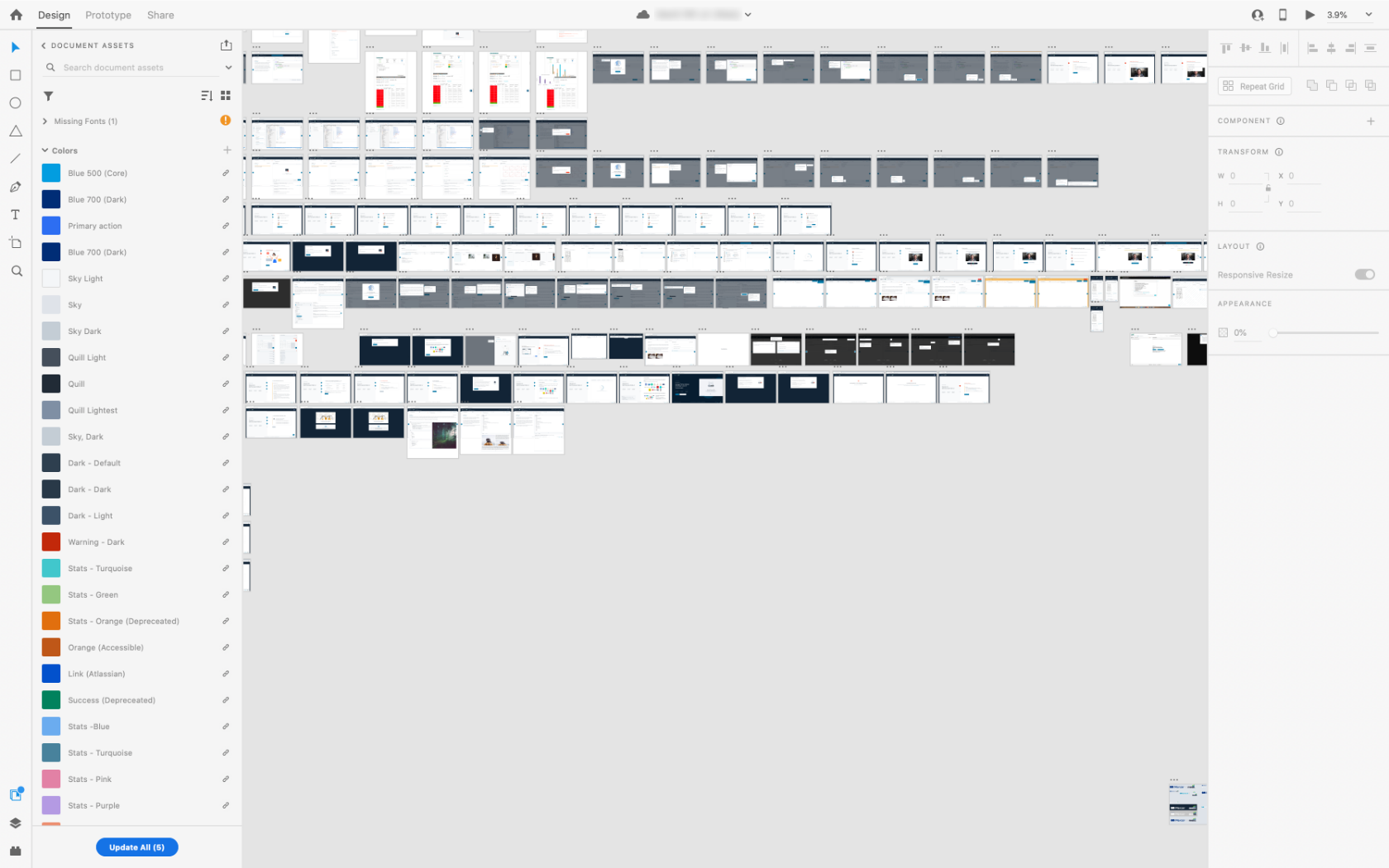 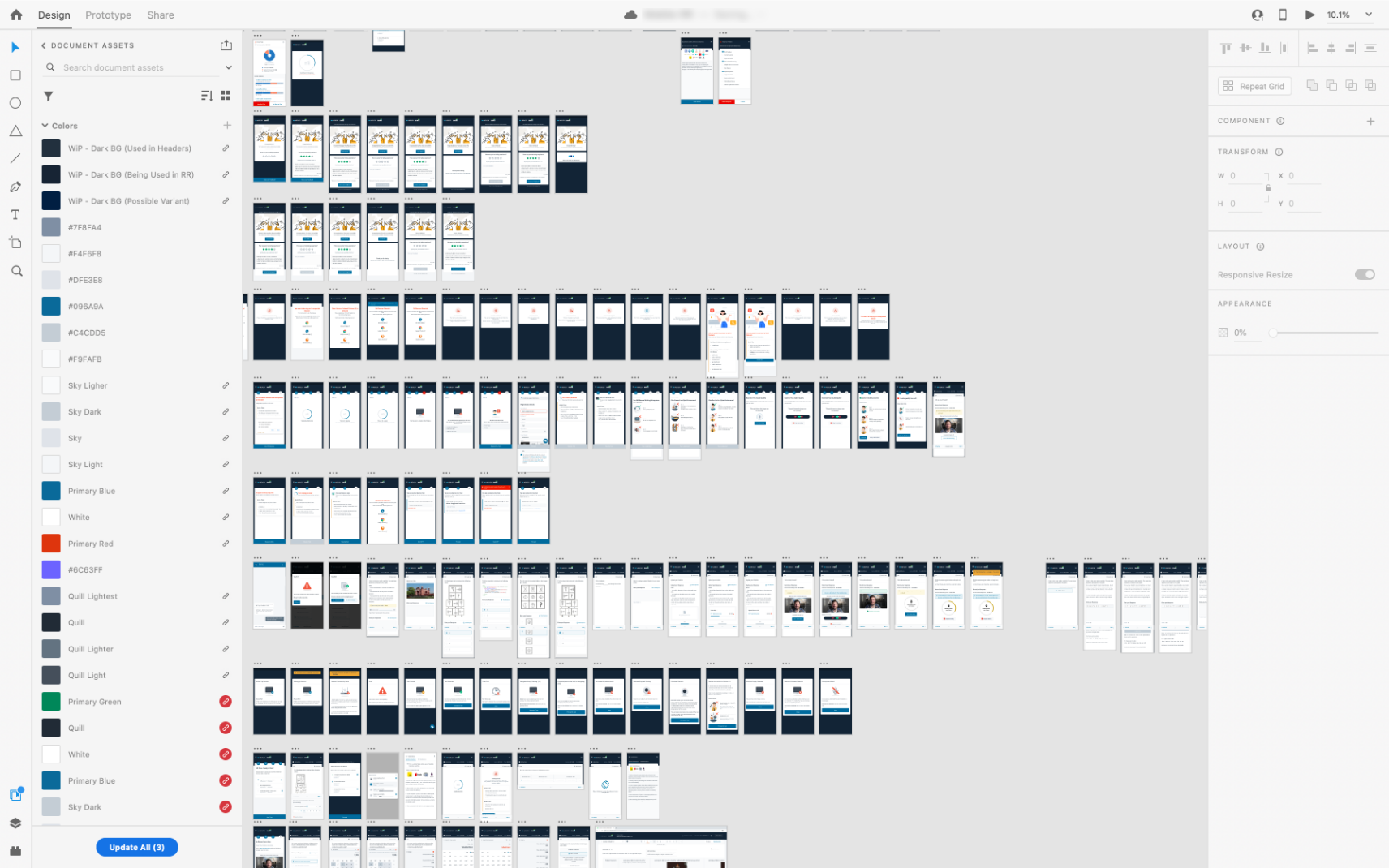 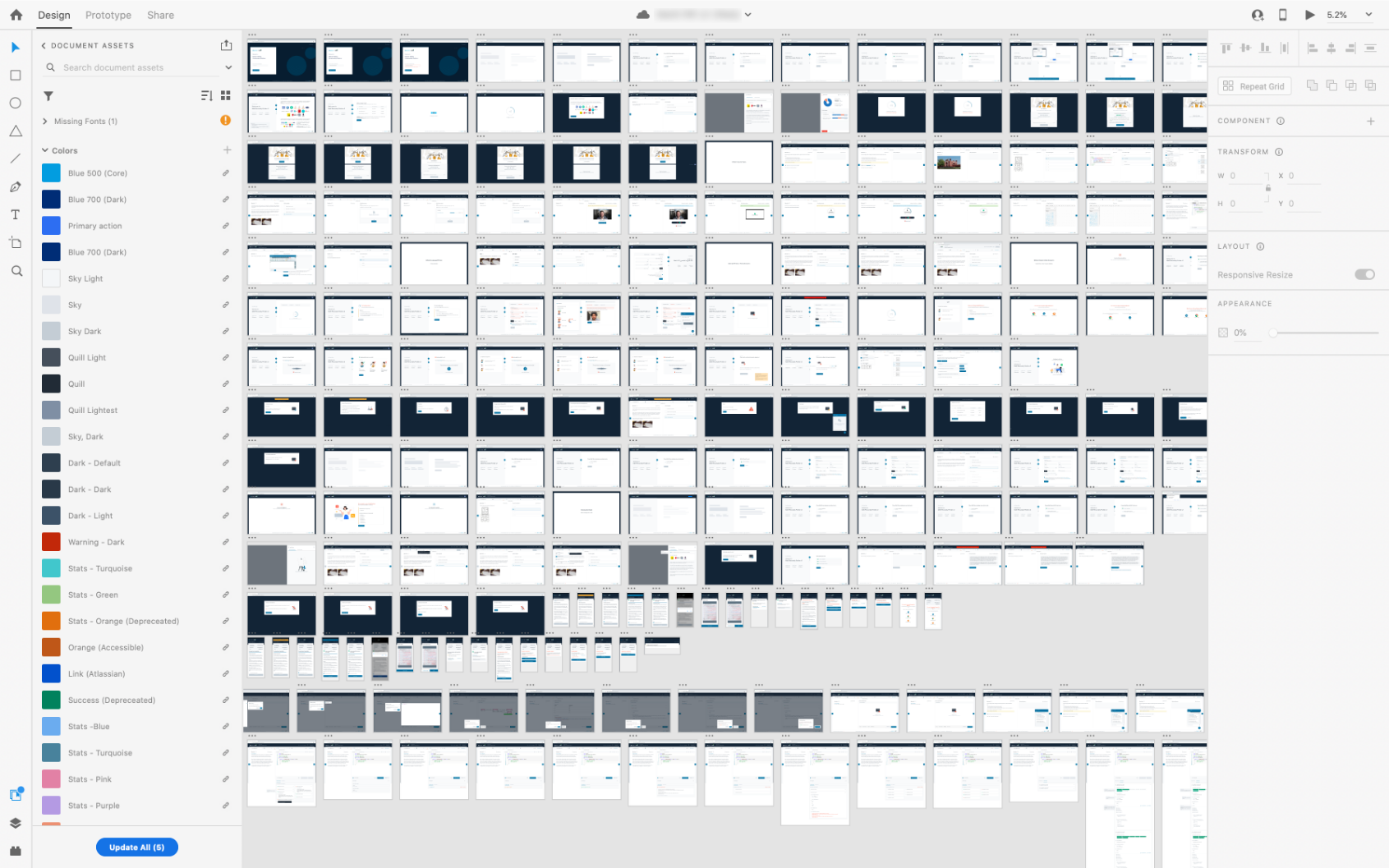 After a battling pandemic and the rigorous development cycles for more than a year, We were able to ship the first release of the new and improved Test-taking platform - loaded with a brand new interface, new features and revised implementation of existing features and overall better UX.

The test journey is divided into three distinct phases

The interfaces and scenarios that a typical test-taker experiences before launching the actual test.
This includes - Permission gathering, ID verification, dedicated test-related checks and more. 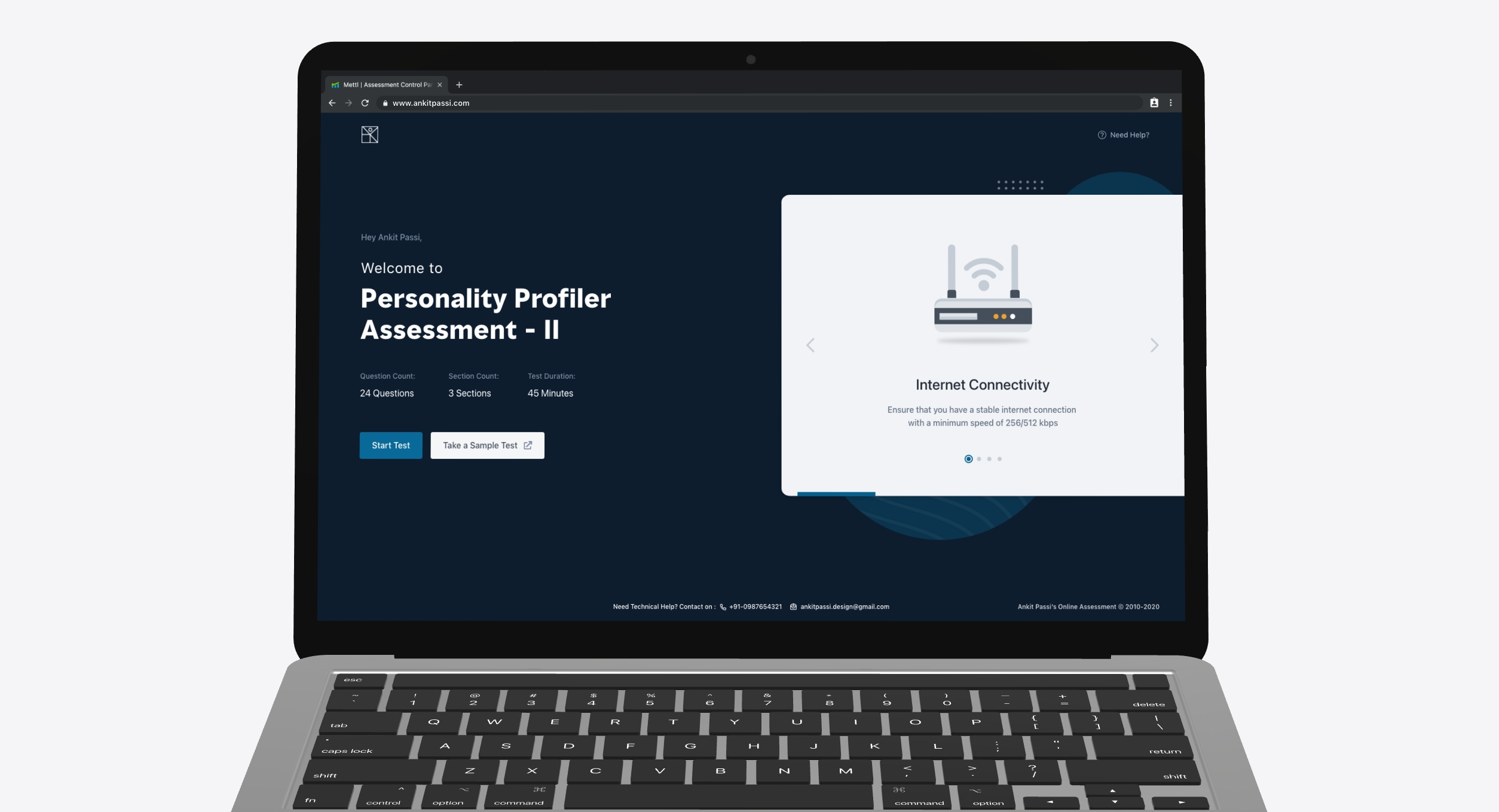 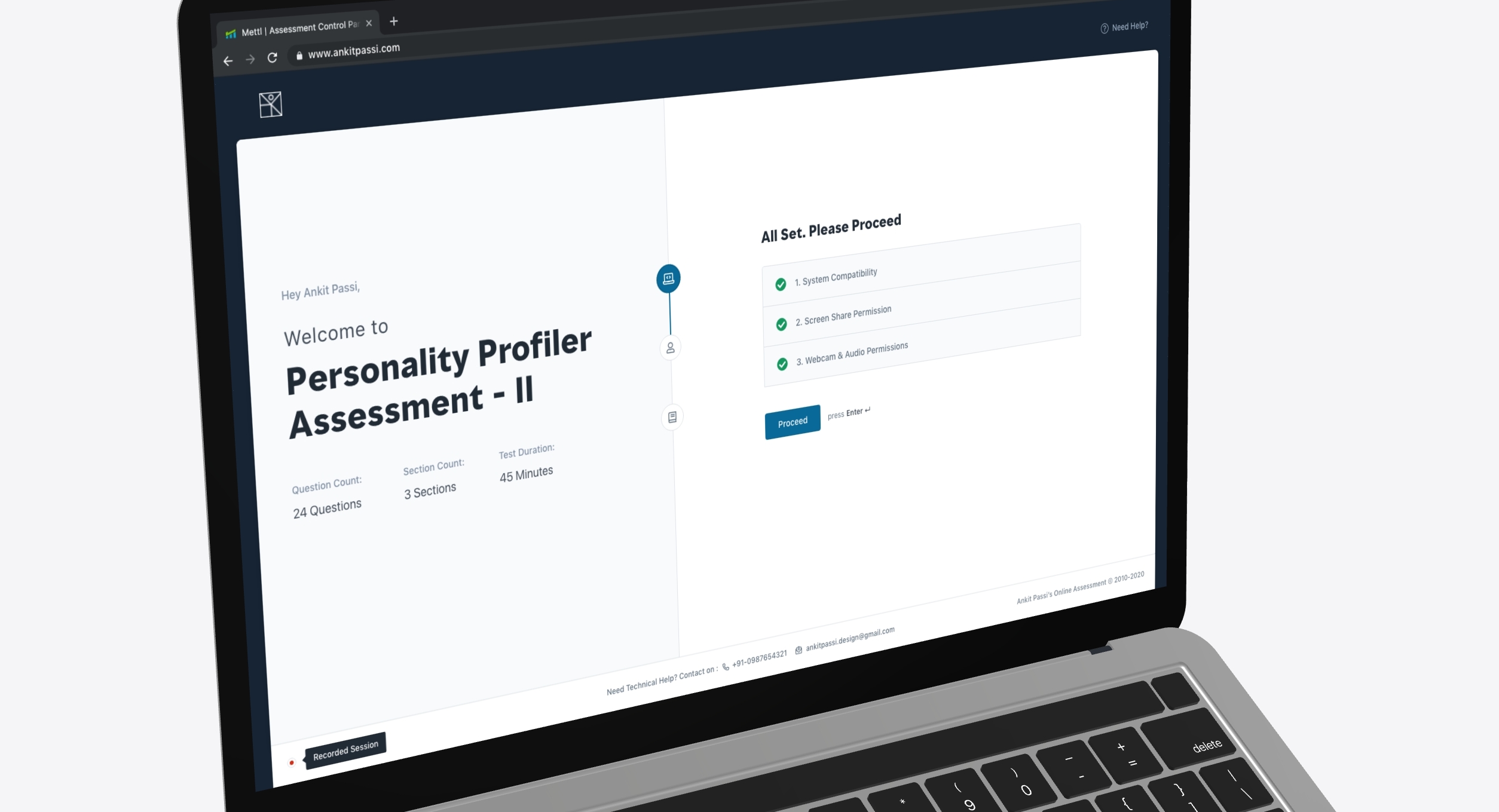 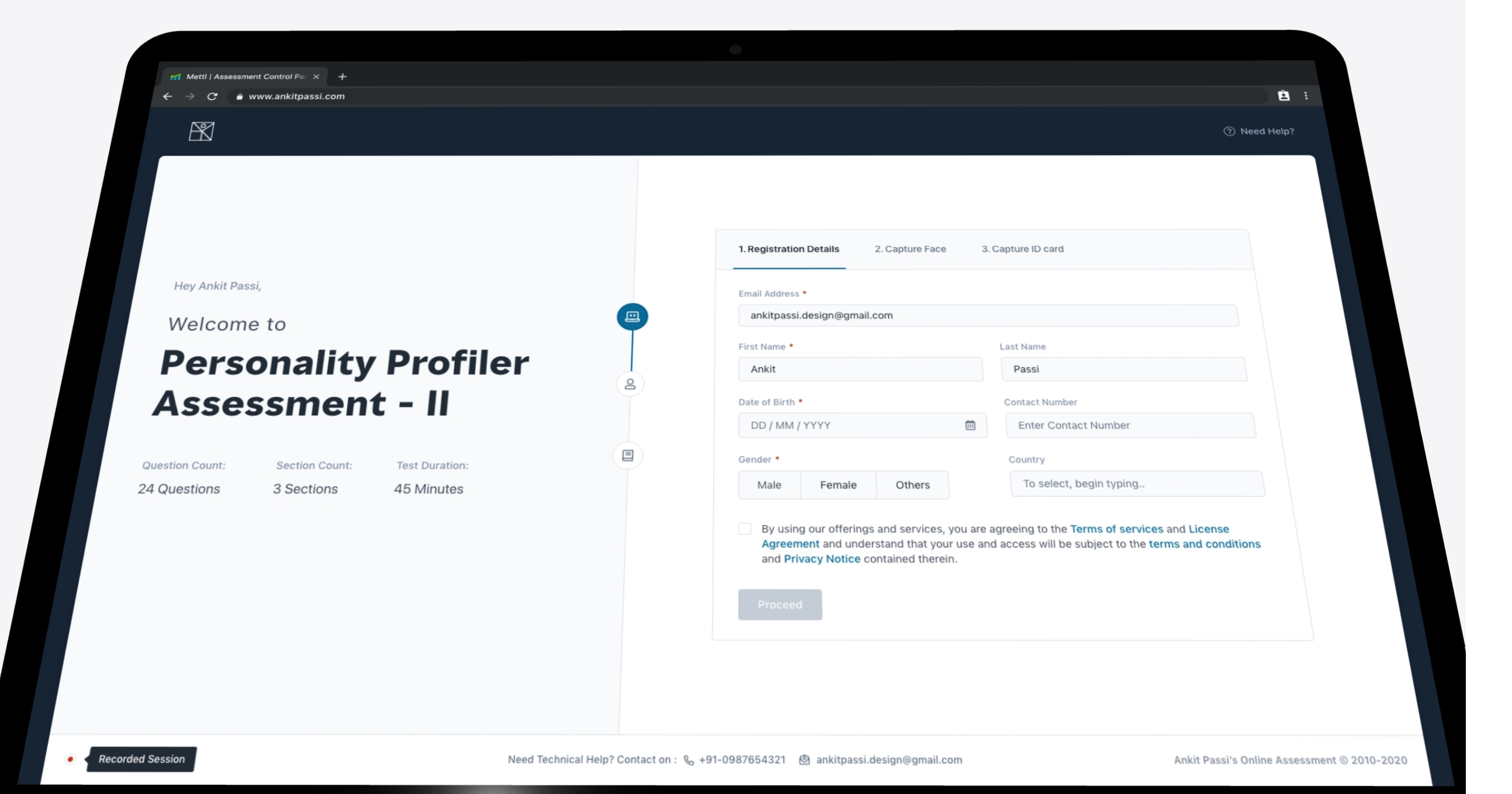 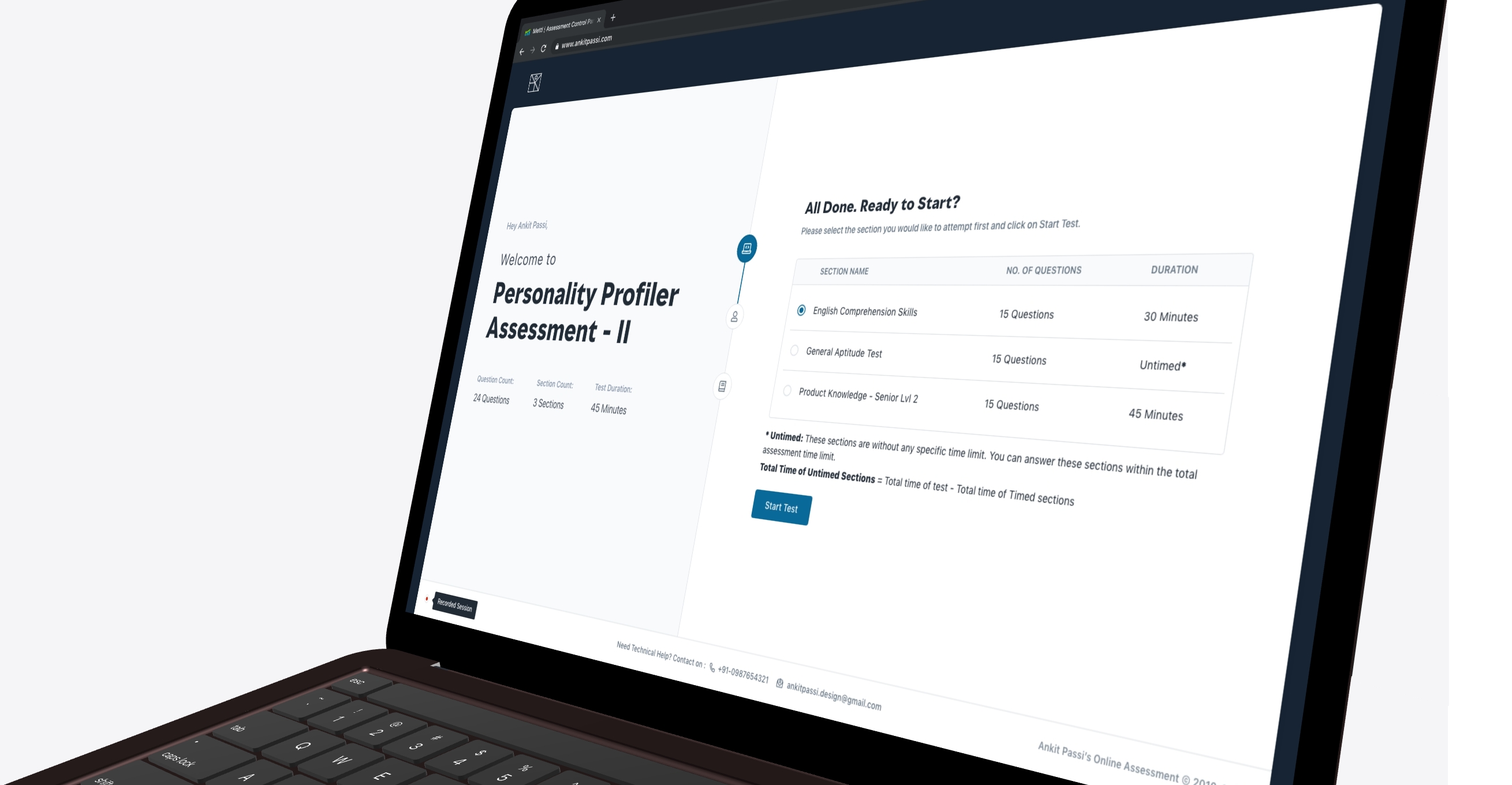 The main interface is where the magic happens - with revamped navigation, modern interface, and improved implementation of available functionalities, pooling towards a much better experience for end-users. 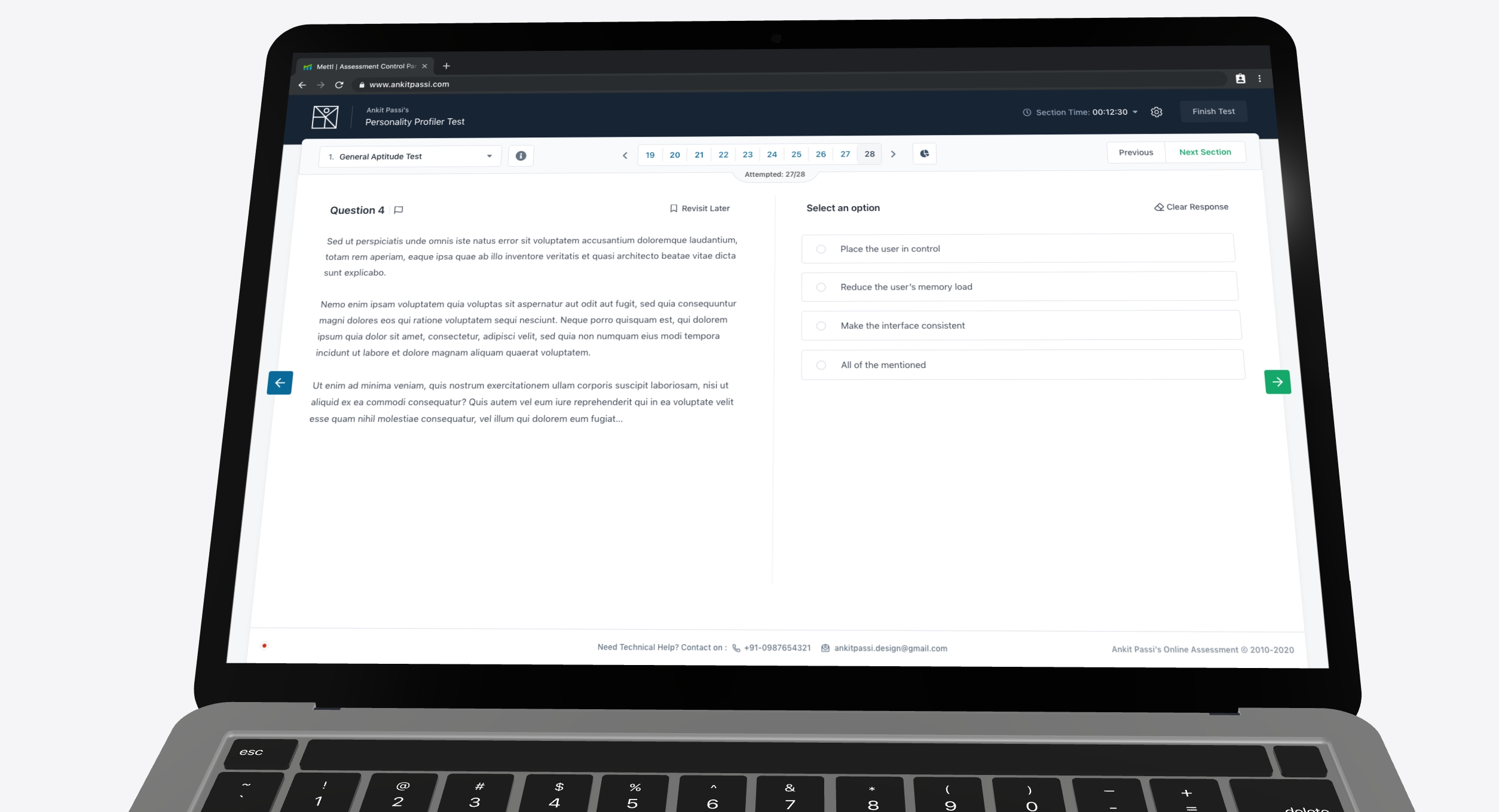 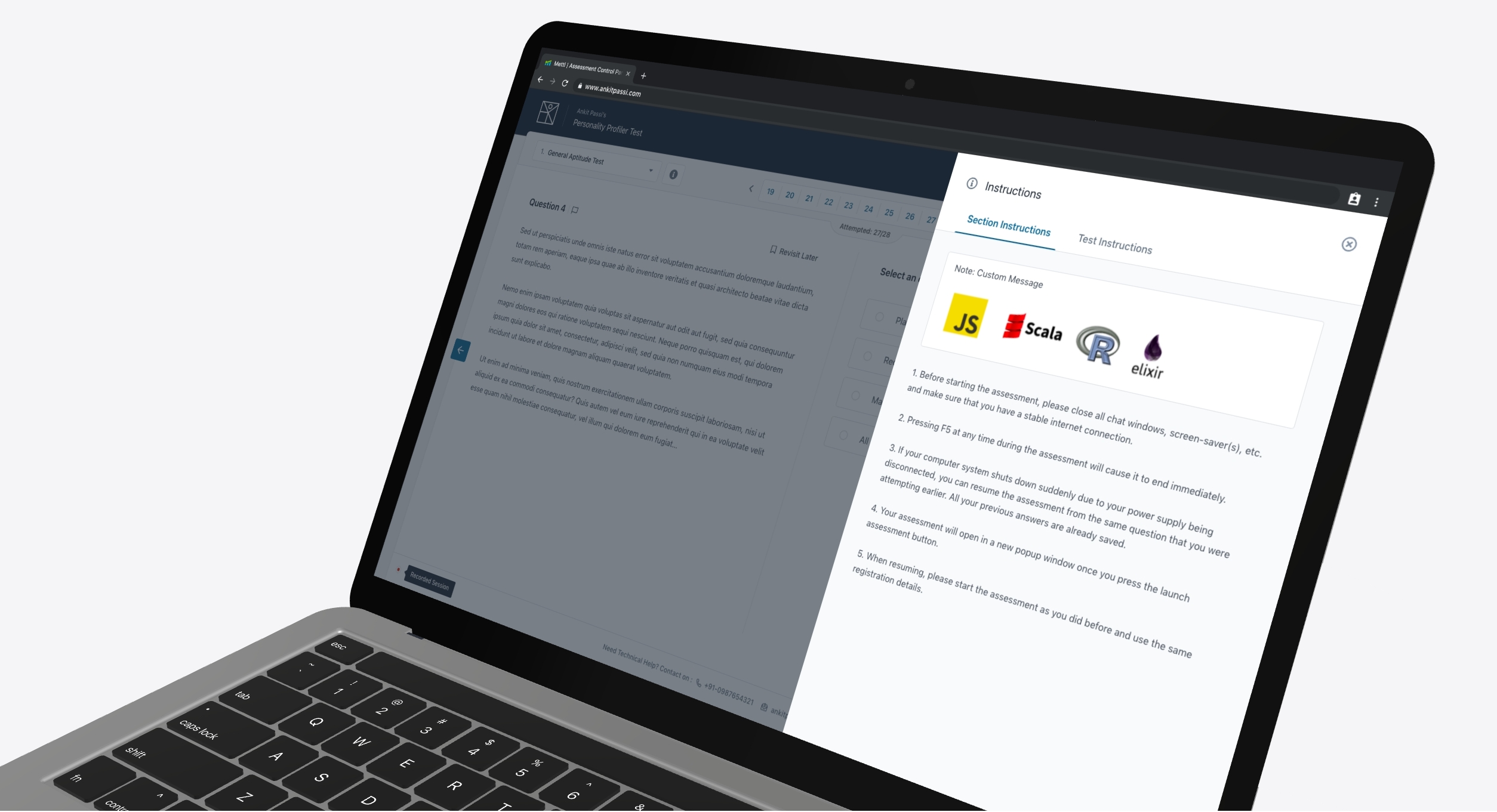 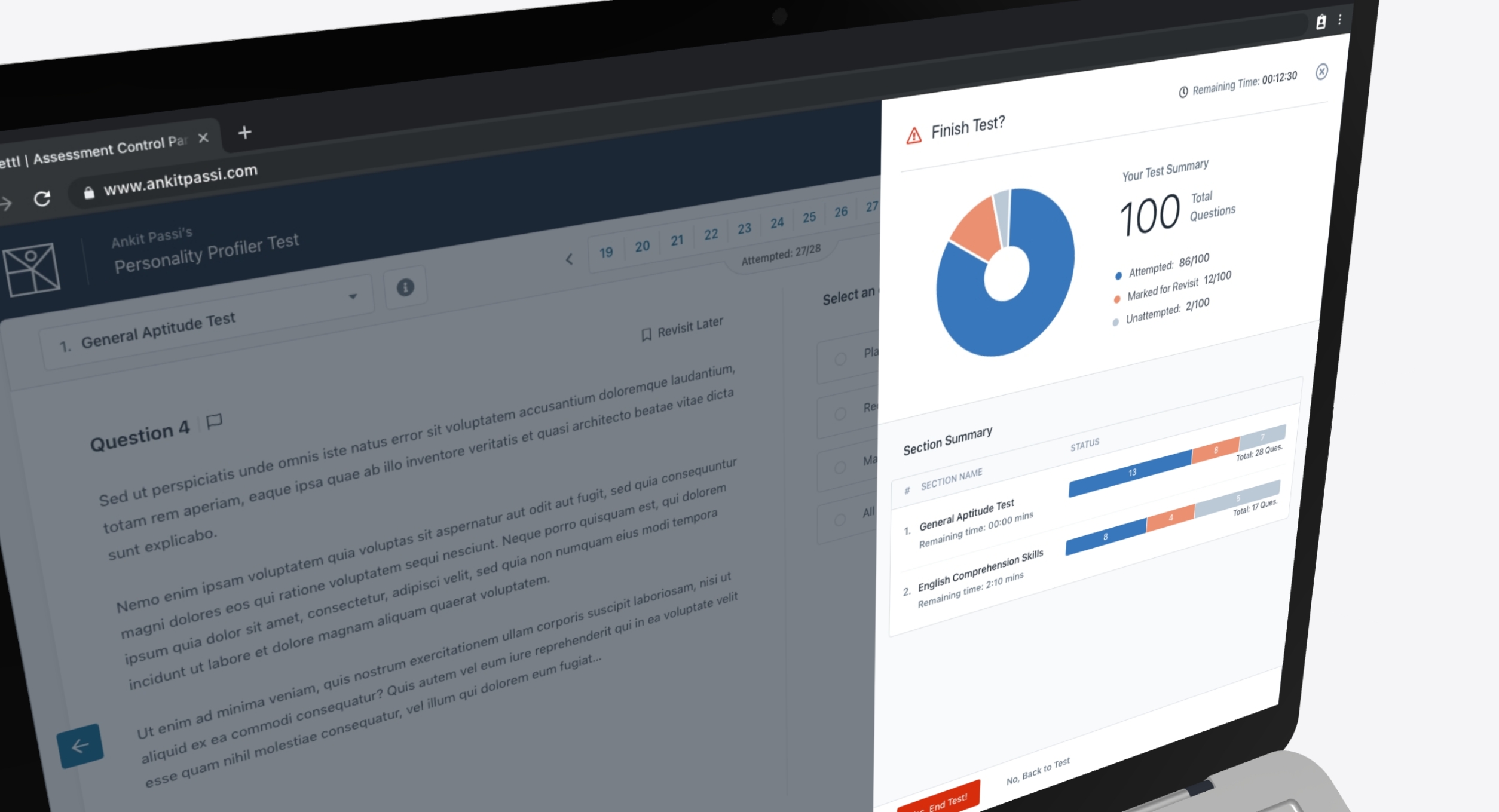 This phase pertains to the available functionalities that test-takers encounter after completing their test, including real-time score viewing, report availability, and navigation towards the subsequent stages of the test-taking journey. 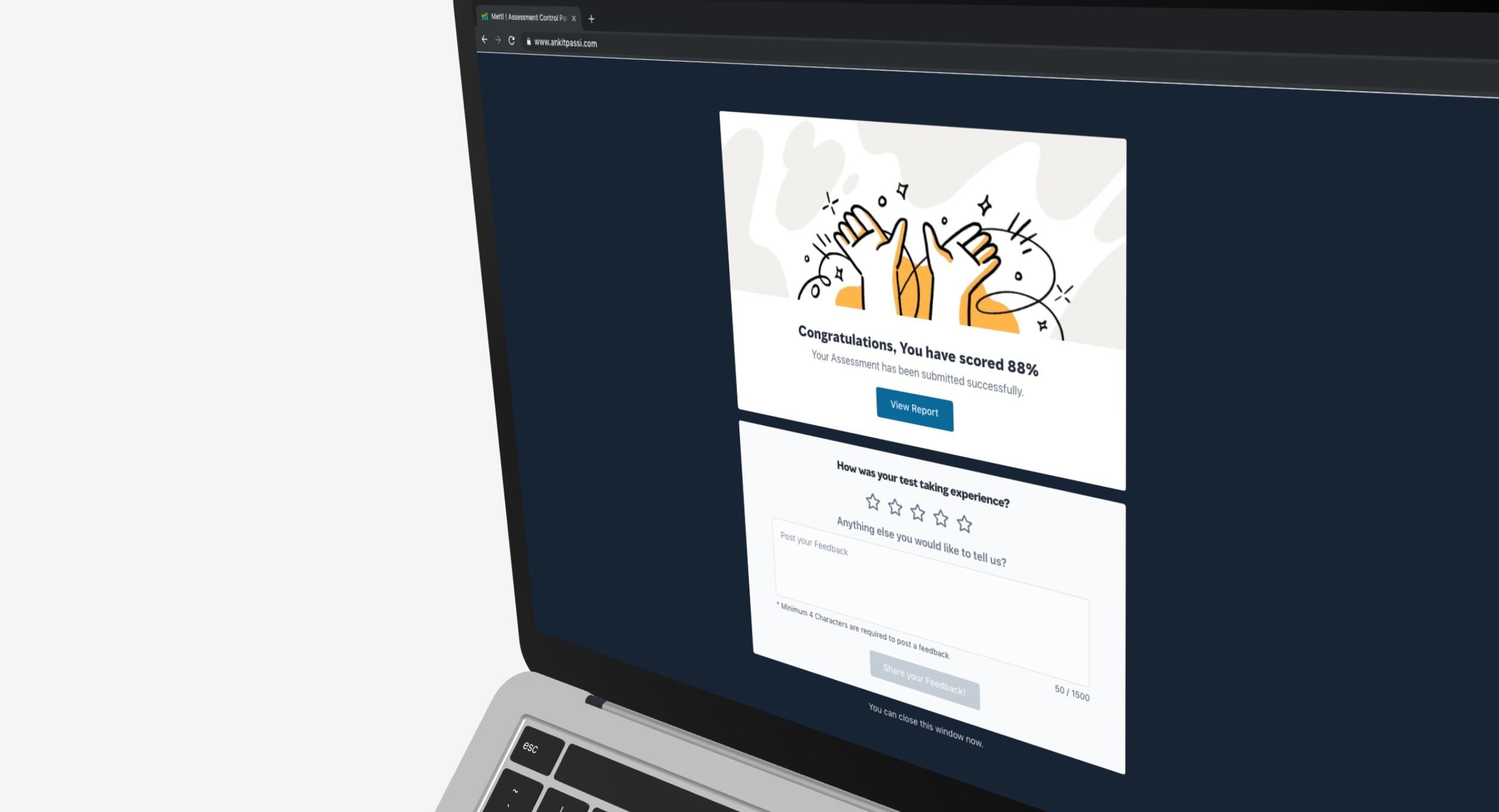 After more than a year of hard work, we launched the new website.

People unilaterally agreed that question discovery and navigation to and from different sections are more accessible than the old platform.

People have an overall positive sentiment toward the new test-taking platform website and frequently describe the site as modern, simple, and improved.

"Our new-age tools and methods now enable remote online exams on the platform.
The state-of-the-art software allows both human and AI proctoring, ensuring credibility and sanctity of the examination process."
CEO, Mercer-Mettl

I would like to thank the Product Design Team - Rajat Budakoti and Anmol Bindra, for assisting me in creating this new behemoth of the Project and guiding me throughout the product design cycles.

I would also like to thank the Product Manager(s), Technology Team, QA for a seamless collaboration during the development of the Project and creating the best experience possible for the end-users through this Test-taking platform.